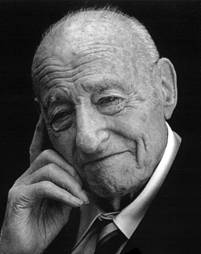 How to begin... perhaps in the same way that serious occasions are begun everywhere in the world these days.  By reminding everyone to turn off your portable 2-way radio signaling devices.

How amazing is it that these these things have become so mundane, that asking for a few minutes of radio silence isn't just a clever way to open a eulogy for a radio pioneer, but part of our common culture and etiquette, right around the world?

The walkie-talkie was described as "miraculous" when it appeared in the 1940s.  Miraculous - a word that refers to something seemingly so impossible, it would normally have to be written off as divine intervention.  If a 20 pound set that lets you talk to someone a few miles away was miraculous, then what kind of world is it that we have created today?

I use the word "we" figuratively, because most of us here did not have much to do with creating it.  But we have all been profoundly touched by one man who did.

*  *  *
Having a gifted inventor as a grandfather was... well, it was perfectly normal if that was the only grandfather you knew.  He did all the things that I thought grandfathers were supposed to do, like build Morse code toys out of cigar boxes and nine-volt batteries, and run antennas out of your bedroom window and up a tree in the backyard, so that your home-made short-wave set could pick up the Tokyo time signal.

When I was 13 I built an electrical circuit in high school shop.  It was a dinky little thing, and badly-built, frankly.  All it did was blink two lights on and off, so it was pretty darned useless, too.  But the lights actually did blink in the proscribed fashion when you connected the battery, so I got a good mark, and I was quite proud of it.  I was taking my first baby steps to being a mad scientist, which was a perfectly respectable choice of profession, as far as I could tell from grandpa's example.

I took it up to grandpa's to show off my new-found electrical engineering prowess.  And believe it or not, he was wowed.  He was so impressed, in fact, that he had all sorts of great ideas for improving on it.

I can't remember all of his ideas, but I'm sure that he suggested that by the addition of a rectifier and a few transistors it and one of grandma's pie-plates, it would probably make a workable satellite dish, and with a few wheels and a rocket engine, and we could probably turn it into a half-decent lunar rover.  I don't think we ever finished that project.

*  *  *
Pay television came to Vancouver some time in the early 80s.  I remember that grandpa was quite annoyed with the Cable TV companies.  The reason he was annoyed was because it was so darned easy to DE-scramble the Pay TV.

He explained it to me once.  All you had to do was make a certain kind of electronic circuit, insert it between your cable outlet and your converter, and you just had to make sure the circuit would invert a certain signal in a certain part of the scan sequence, and... and... well, it was that easy.  I mean anybody could do it!

I believed him, despite the fact that I had no idea how to do it even after he explained it to me.  And I was 13, so you can believe I would have done it if I could get free Pay TV.

But as far as grandpa was concerned, this stuff was child's play, and the fact that the cable companies hadn't even bothered to make the problem even slightly difficult for him was probably the most annoying thing of all.  I mean he didn't want Pay TV.  It was just more fat-heads.

What he wanted was an interesting problem to solve.  What he was hoping is that the cable TV companies, with their billions of dollars would have been able to surpass him technically, so that he would be forced to spend an afternoon in the lab with his oscilloscopes and gadgets just to figure how they did it.

After all, he had built his own signal scramblers onto his walkie-talkies in the 1940s -- surely they would have been able to do something really interesting in the scrambling field by now.  But they hadn't.  And it was NOT a source of pride for him that that the cable companies hadn't surpassed him in the state of the art.  It really bothered him.  He was quite sure they were capable of it, and he really and truly wanted them to do it.

He didn't want to be rich or famous for inventing cool stuff.  He just wanted there to be more cool stuff.

And who wouldn't want that?

*  *  *
Today the English language has a word for that kind of person.  This word didn't exist in grandpa's day -- it took computers to bring it into the mainstream.

At MIT in the 1950s, a "hack" was a prank.  In time, a hack became any project that wasn't really necessary, but was especially fun and interesting to engineer.  Great "hacks" were accomplished with style, innovation, and technical virtuosity, and the unique kind of talented engineers it took to pull this off became known as "hackers".

Now, some people think hackers are mischievous youths who like to take out other people's computer systems.  That's a misunderstanding... but on the other hand, grandpa did get into radio after taking out the local radio station with his homemade crystal set, so...

Clearly, grandpa was a hacker before computers had even been invented.  But of course he was ahead of his time in many ways.

*  *  *
In his later years, he deduced that plants talk to each other.  Kind of a crazy idea, but once you get a crazy idea like that in your head, it's kind of hard to stop thinking about it.  I mean, what on earth could they be talking about?

So grandpa took one of grandma's geraniums, and -- it's name was Gerry, by the way -- and he mounted it onto a tripod, using a special pot with certain conductive properties, and he had the poor little guy all wired up with electrodes in the soil, and attached to leaves, and cables running off to complicated instruments in the lab, and he put Gerry through the paces.

He had a little static gun that he would aim at Gerry and pull the trigger, and boy would Gerry holler.  Not out loud of course, he was only a geranium, but the instruments that were connected to Gerry would go wild, and grandpa would provoke him more, and the instruments would go crazy again.

Grandpa and Gerry had these little conversations for weeks, neither one fully understanding what the other was trying to say, but eventually they came to terms.  Grandpa decoded geranium-speak and they were finally able to have a real conversation.

It turns out that Gerry was asking for water, and after grandpa gave him some, Gerry really didn't have anything interesting left to say.

Now, this whole process may strike you as an exercise in futility, but it was intensely interesting for grandpa.  He had hacked a geranium, which is substantially more difficult than hacking Pay TV scramblers.  The fact that the geranium only had one thing on its mind was not surprising, especially for grandma who claimed that she knew all along what Gerry wanted, but that's beside the point.  Knowing what the geranium wanted, and being able to ask it directly to its face were two entirely different things.  To grandpa.

A number of years later I came across an article in a newspaper, describing how researchers working for the federal government had deduced that tomato plants talk to each other.  And the most amazing discovery, according to the article, was that they did it using tiny electrical currents.

Crazy stuff, and it probably only cost a few million bucks to figure that out.  I told grandpa about this research, but he wasn't that impressed.  After all, he had already figured that out, with about 25 cents worth of spare parts.  And he didn't particularly care who got the credit for the discovery.

Plus he probably doubted that tomato plants were better conversationalists than geraniums.

*  *  *
In his last years, new ideas kept coming to him, but it got harder to tell which ones were the products of a weakening mind.  Sometimes I'd visit, and grandpa would begin rambling, and I'd think to myself that he can't quite hold onto his thoughts anymore.  And he'd ramble on for half an hour or more, and then all of a sudden, he'd reconnect this stream of consciousness back to where he had begun, and I'd realize that he wasn't lost at all -- he knew full well where he was going with this conversation.  He was just connecting the dots more freely than he ever had before, certainly more freely than anyone else could hope to follow.

But that's always how he worked.

And this made me wonder -- what if he could see patterns that were obvious to him, and invisible to us, and he simply couldn't explain it in terms we could understand?  What if everything that seemed impossible, were in fact possible... with a little tinkering, that is, and 50 cents worth of parts from Canadian Tire?  That would be an incredible, miraculous world.

That is the world grandpa lived in his entire life.  I hope it's the world he left behind for the rest of us, but it's going to be hard to tell with him gone.