"Chicletta!" says the little boy, giving me a big grin and bouncing on his seat.

"Chocolata?" I ask, misunderstanding his two-year-old mind's intent. I mime the eating of bonbons.

"Bicicletta," his father explains in Romanian, nodding at my Suzuki, parked beside this Transylvanian mountain cabana. The arrival of a Japanese motorcycle at this remote hovel is apparently an extraordinary event. Sometimes in Romania I feel like I'm driving a Ferrari, not a ten-year-old dirt bike with bald tires and no working lights.

It is my hope that the Suzuki will carry me all the way to Turkey, and if it does, then my hope will be that it carries me all the way back to Amsterdam, where I started. A motorcycle tour of Eastern Europe has long been a dream of mine. Unfortunately, the amount of motorcycle my money could buy in Western Europe turned out to be much less than expected. Not that anyone notices in Romania.

Gaby, a policeman on holiday from the Black Sea coast, wants to know how much the Suzuki cost. I inventory all the defective parts, eager to prove that I'm no Aristotle Onassis, but perhaps this has the opposite effect. It still comes to two and a half years worth of Gaby's salary.

It's easy to lose all sense of value in Romania. My bed tonight- --in a private hut---is costing me $4.50, and it's possible that that is an inflated rate for foreigners. Okay, there's no electricity, and shepherds keep leading their flocks through the yard, and the mountain dogs wake me up in the middle of the night barking at the Transylvanian moon (I chased one around in a groggy stupor last night, fully intending to kick it if I could). But that's all added value in the end. One mustn't expect dull silence in the land that gave birth to Dracula and Ceaucescu.

The riding is both rewarding and perilous. The main roads curve and roll through lush vales, dotted with haystacks, silver church domes, and tiled village roofs topped with storks' nests. But they are also little more than two-lane moonscapes, with a hodgepodge of competing traffic, including wandering cows, horse- drawn gypsy caravans, smoking East German Trabants, and great diesel-belching East Bloc transport trucks.

Although the occasional moped ventures out onto the roads, motorcycles are a rarity. Villagers and farm workers all stop and stare as the Suzuki rattles by. None of the drivers seem to know how to share the road with something of more than 50cc. More than once I am driven off the road by aggressive oncomers who decide that the presence of a motorcycle means the lane is empty and available for passing. Not that they are any more sensible in the presence of cars; no rule of the road will be left unbroken in an effort to pass in the flats. In the mountains, however, few cars seem to be able to muster enough firing cyclinders to get past the crawling trucks. Then my own aggression takes over, peaking one afternoon when I find myself splitting two lanes of opposing traffic on a mountain curve. Nobody honks, however, and while I'm marvelling at the stupidity of the move I've just pulled off, everyone else is probably wishing they could do the same.

Somehow the bike just rattles on, holding itself together through all this. I find myself using scotch tape to make sundry repairs, from reattaching the horn, which fell off in Hungary, to holding the license plate together, since it is cracking up from the continuous punishment dealt out by the Transylvanian roads. So far I haven't figured out how to use the tape to stop the oil leaks. But I'm working on it.

That morning the chain was threatening to jump the sprocket for the third time, so I pulled into a mechanic to see if I could get them to loosen the wheel nut (it was on too tight for me and my little spanner wrench). They not only do so, but insist on performing the entire chain adjustment themselves, and then try to charge me 5000 lei. I've noticed their rates, scrawled on a piece of paper taped to the wall: 4000 lei/hour. I tap my watch and complain in broken Romanian (frequently consulting my phrasebook) that it only took ten minutes, and they are charging me for more than an hour's work. No, they explain, 4000 lei per hour is the rate for domestic cars, the Romanian Dacias. Once again, my roach of a Suzuki is an exotic piece of foreign machinery, even when the work only consists of turning a couple of screws. I pay 4000 lei, only about $2.50, but I still feel stung.

The low prices are only a part of the time warp one experiences driving through Transylvania. The peasants with their giant hand-made scythes and hay rakes, the donkey carts full of swaddled children, the hand-made lace that old women try to sell you in the shadow of medieval castles; this is no longer the West. This is barely even the 20th century. Tire repairmen advertise their shops by nailing a tire to a utility pole, the same way blacksmiths of old would hang a horseshoe. Even the omnipresent icons of American culture are not of this time: the Coca Cola is still served in slim glass bottles, and the disco blaring from the bar across the road has an ancient Gypsy zing to it.

I'm a transient, however, and I must move on. The next morning I climb on the Suzuki and head for the Black Sea. The treadless wheel, coated in mud from the cabana access road, spins as it hits the pitted blacktop. I have to cross into the opposite lane to pass some goats, and then back to avoid a grumbling diesel behemoth. My hand signal must look like a wave to the truck driver, because he honks at me or perhaps at my infinitely exotic foreign machine. I would honk back if the horn worked. 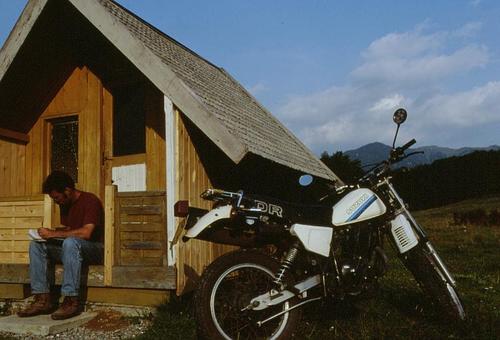