The darkness of the Transylvanian night is almost complete, except for the rich starscape that can be picked out through cracks in the clouds. Shepherds' dogs are baying, far off in the mountains, and the faces around me are barely visible in the glow of gas lamps. There is no electricity at this mountain cabana, a collection of tiny huts for travellers.

``Just like in the days of Ceaucescu," says Gaby, getting a chuckle from the proprietor. Gaby is twenty-two, a policeman from the Black Sea city of Constansa. For his vacation, he and his wife Monica are driving through Transylvania. On a salary of $100 per month, they don't have many other choices.

Romania is a poor country, but not desperate. The land is lush and beautiful, and the brown-skinned peasants carting hay in their horse-drawn carts are muscular and well-fed. I stop in street markets to buy my lunches, and gorge to the point of illness on watermelons and the most wonderful breads, for less than 50 cents a bellyfull.

It's easy to lose your sense of value in Romania. Having spent the previous two months in Western Europe, where so much as gazing wistfully through a baker's window can cause your wallet to spontaneously combust, I now found myself eating daily in fine restaurants, where a 3-course dinner with half a litre of beer adds up to $3.50. Gaby asks me as tactfully as he can with his poor English if I agree that the restaurants are overpriced. I try to explain that back home I could barely purchase the beer in a restaurant for that amount.

This initiates a discussion of prices. They want to know how much I paid for the Suzuki motorcycle that has managed to transport me here from Amsterdam. The ten-year old heap is leaking oil, the chain is stretched to the breaking point, the tires are bald, and the lights stopped working back in Germany. Still, it gets more attention than a Ferrari in these parts. The proprietor's young son is agog with the novelty of it. ``'Cicletta!" he keeps saying (as in bicicletta---bicycle), and I keep misunderstanding his two-year-old mind's intent. ``Chocolata?" I ask, miming the eating of bonbons, and the boy laughs and makes motor noises and bounces on his seat. ``'Cicletta! 'Cicletta!"

Four and a half million Romanian lei is what the Suzuki cost, and everyone sits back, stunned by the figure. It's a third of what it would cost to bring electricity to this cabana, and that's an impossibly large sum. I try to point out the flaws of the machine, eager to prove that I'm no Aristotle Onassis, but perhaps I unintentionally awe them even more. Imagine the price of a new Suzuki...

The roads here are full of rattling, smoking East German Trabants, and comparatively luxurious Romanian Dacias. Although few can muster enough firing cylinders to pass the transport trucks on mountain ascents, the drivers will leave no rule of the road unbroken in their efforts to pass in the flats.

Almost as common as the cars are the horse and donkey-drawn carts, full of farmworkers, gypsies, and swaddled children. The motorized traffic races around them, and then brakes for the strolling bulls and nervous flocks of sheep around the next bend in the road.

Such unspoiled scenes abound amongst the haystacks, chimney-top storks' nests, and silver church domes of rural Transylvania. Commercialism is still largely unknown to the Romanians. Yes, you can buy Coca Cola, but it is still served in slim glass bottles, and the billboards and neon hype of Budapest in neighbouring Hungary are mercifully absent.

Even what is one of the bigger tourist attractions in Transylvania---the castle of Count Vlad Tepes (ostensibly the inspiration for Dracula) in Bran---is remarkably low-key, with a small crafts market and some pensions scattered around. I turned up just as a thunderstorm descended on the village and shook the surrounding hills for an hour. In spite of its reputation and the monster-movie atmosphere, Vlad's little fortress with its whitewashed walls and red-tile roofs looked rather homey and inviting.

Warmth and charm defy a reputation of crime and corruption throughout Romania. I brought no small amount of trepidation with me, including a sackload of rumours about gas queues, gypsy thieves, and bent cops, none of which materialized. The gas stations were clean and efficient, staffed by skirted gas jockettes with fistsful of lei who pump the cheapest fuel in Europe. The gypsies I came across were characterized by the horse-drawn caravans on the roads, and by Mariana, a young beggar girl in the stunningly authentic medieval town of Sighisoara. Although I only gave her 100 lei (seven cents), she took my picture, and was happy to let me take hers, after which she shyly requested a copy. Unfortunately, the address she gave me (``74") was somewhat unspecific, but I lacked the Romanian to communicate this sad fact.

The police were nothing less than helpful, guiding me to inexpensive hotels in their unmarked Dacias full of assault rifles when I was lost, and never complaining about my less-than- fully-functional motorcycle. Gaby insists that there is little incentive for police to indulge in corruption. ``I have a good job," he explains, shrugging as if that is all one can ask for in the modern Romania. ``Why should I risk that?" There are some surprising perks for him, too. In the days of Ceaucescu, he explains, policemen could face severe punishment for firing their guns inappropriately. ``Now," he jokes, ``you make trouble---pow!"

He cautions me to steer clear of the black market money changers, who seem to mill about in the streets of every Eastern European city. In Romania they brazenly defy the law and mob you as you squirm your way into the exchange bureaus, flashing their calculators, sometimes offering a few percent higher than the official rate, sometimes misplacing a decimal point to their own benefit. It never seems to be worth the hassle or risk.

Besides, many western currencies will be accepted in leiu of Romanian cash, and prices are typically given in your choice of (US) dollars, marks, or lei. These prices don't always agree. In my first night in Romania, I was offered a four-room suite with Persian rugs and luxurious wooden furnishings for DM20, but it was only the equivalent of DM15 if I paid in Romanian currency. (Stupidly I passed, reasoning that I should be able to find a single room for much less still. Sundown forced me into a much less stylish hotel, for more money.)

But that was all several nights ago. Tonight my hut, nestled in the Carpathian mountains southeast of Brasov, is setting me back the princely sum of $4.50. There may be no electricity, but there are also no diesel fumes, nor the endless faceless apartment blocks of communist-era urbanity.

The proprietor of the cabana offers me a cupful of sugared wild berries that he picked earlier in the day. For making wine, he mimes. Gaby and Monica jump up and fetch a watermelon from their hut, and we noisily slurp up the sweet fruits and drink Cuicas beer until the deep Transylvanian mists chase us into our beds. 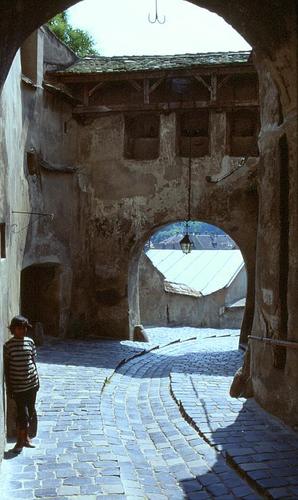