posted on May 2, 2011
Osama bin Laden's assassination was an interesting bit of political theatre. The news is enthusiastically trumpeting that the mastermind behind the 9/11 terror attacks has been killed in his fortified compound after a 10-year manhunt. It's a single-sentence story that makes use of all kinds of tropes to allow us to fill in the complex backstory with various villainous stereotypes, learned mostly from James Bond films.

Trope #1: The Impenetrable Lair of the Evil Genius. Doctor No is the archetype of the evil genius. By means of this trope, we are allowed to believe that Osama has spent his time holed up in ingenious, high-tech lairs, from which he directs a vast, many-tentacled network of minions to do his evil bidding.

This appears to be a Hollywood version of reality that has no basis in fact. There is no evidence that anything like the "Binladenland" super-villain lair actually existed in the mountains of Tora Bora. The early media reports from his assassination described his more modest lair in northern Pakistan as a "mansion", but the early photos and maps show more of an ugly suburban compound, such as might be expected of a minor drug lord or third-world gangster. Not to downplay the actual mission difficulty--storming the compound of a third-world gangster unquestionably means a shitload of bullets flying in your general direction, so it would certainly require some serious military professionalism to get the job done right.

Trope #2: The Many-Tentacled International Terror Organization. Dr. No's SPECTRE is the media's model for Al-Qaeda. But organizations like SPECTRE have members and a structure, which Al-Qaeda does not. Al-Qaeda is an invention of the western media, which uses the SPECTRE trope to gloss over the complex nuances of Islamic political extremism, by suggesting that it is a villainous organized body with a command structure and dedicated minions--something that we are much more familiar with through our dalliances with James Bond. It allows the media to tell a simple but compelling story without having to pause every second sentence to explain the politics of Wahhabism or the complex interrelationships between revolutionary politics and religion in the Islamic world. Nine out of ten viewers would get confused and change the channel if the media tried to explain that Al-Qaeda is really just an umbrella term that they invented to associate a diversity of radical movements with overlapping interests, in the interest of compressing complex news stories down to a sound bite.

We would get even more confused if they actually took the time to explain that these revolutionary movements are directing their primary wrath at their own middle-eastern tyrants, and the United States is only suffering collateral damage as the primary supporter of these regimes. We might start to wonder who the good guys are. In fact, you may be wondering that right now, so I'll just remind you that there are none. A better trope to understand all of this, is not Doctor No, but Scarface. There are numerous different groups of vicious killers engaged in a furious turf battle over... well, it's money, it's always just about money. And in the end, the decadent and coked out kingpin goes down in a blaze of gunfire, screaming "You wanna play rough? Say hello to my little friend!" as his gangland hideaway gets stormed by rival gangsters.

Trope #3: The Evil Genius and his Diabolical Plan. Dr. No planned to take out a U.S. space mission with his atomic ray. Bin Laden, on the other hand, planned to take out the architectural symbols of American power with airliners hijacked by suicidal pilots. Right?

Well... maybe. The FBI publishes its most-wanted terrorist list, and Osama bin Laden has held the #1 spot for years now. There is no doubt that he was a bad dude of the first order--he is directly cited for his role in a number of Embassy bombings that killed hundreds. However, the FBI makes no mention of the most heinous crime in U.S. history that killed over 3000 people. When questioned on the matter, their frank response is that they do not have the evidence to accuse him of involvement in 9/11. Instead, his wanted poster only mentions "other terrorist attacks" in which his involvement is suspected. Bin Laden himself corroborated the FBI's version of events--he disavowed involvement shortly after the attacks, and subsequent taped admissions that have made the news have been shown to be bald-faced forgeries or ambiguous "endorsements" of the attacks. 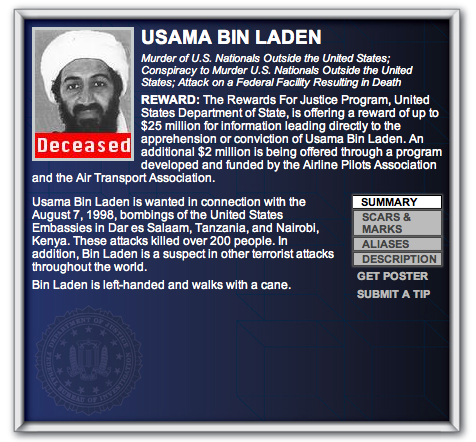 The whole evil-genius-and-his-diabolical-plan-to-blow-up-America trope was apparently started on September 11 itself, by Richard Clarke. He was speculating on who could have done such a thing, and since Osama Bin Laden had recently blown up some U.S. embassies in Africa, that was his best guess. It was a good trope, so the media ran with it, and it basically became accepted as fact by everyone except the people whose job it is to actually gather facts about international terrorists. When the media later questioned George W. Bush about why he wasn't trying harder to find the worst man of the 21st Century, Bush admitted that he just wasn't that interested, and it wasn't a priority. Which seems a pretty odd thing for the Texas Sheriff to say about the biggest mass-murderer ever to thumb his nose at the law, unless the Sheriff knew that Bin Laden's conviction in the court of public opinion had little to do with actual facts.

So if not Bin Laden, then who was the evil genius?!? Who the hell knows? If you want a half-baked wingnut theory, you can ask a conspiracy theorist, but their story is only going to be more trope-laden than ever. Maybe it really was Bin Laden--just because we don't have good evidence that he did it, doesn't mean he didn't. The point is not to fill in the blanks with crazy shit, the point is that you can't tell a good story about the worst terrorist attack in history and the various wars that broke out in reaction to it without a charismatic bad guy. The media needed to convict Osama in order to make their job of story telling much easier. And one way or another, this has served political interests enough that they really haven't gone our of their way to make corrections.

Which brings us to today. If it wasn't a priority for the most trigger-happy cowboy president to find and kill Osama bin Laden, then why did it suddenly become a priority for a bleeding heart Chicago lawyer? That's the most interesting question of this whole drama, but few are actually asking it. Most Obama fans are in fact gloating that their President is more bad-ass than the last one, secretly relieved that their guy can also enthusiastically kill brownies, despite his own suspicious pigmentation.

The icing on the whole TV-as-reality-cake is that the whole thing hit the airwaves during the middle of the season finale of The Apprentice, an impeccably-timed "Fuck You" to Donald Trump. Apparently finding and assassinating Osama bin Laden was judged to be easier than assassinating Trump, although politically it may have more or less the same effect.

We are being manipulated in ways that are obvious, and in ways that are not, and we are unconsciously doing it to ourselves as much as we wilfully do it to manipulate others. We interpret the news through a lens that has been shaped by comic-book plots, and action-movie villains. But the writers of the news are no different from us--they were raised on the same crappy television and formulaic movies that we were. They are writing the news to conform to these these same story models, because otherwise it would be hard to tell the stories at all. Our propagandists halfway understand this, and are concocting media spin that takes advantage of our subconscious indoctrination in these forms of story telling. But they are doing this in order to promote ideologies that are subconsciously built on exactly the same set of fictions.

There is an old adage that truth is stranger than fiction, because fiction has to make sense. The unfortunate corollary seems to be that if politics and news is an attempt to make sense of the world, then we are only able to consume it in the form of fiction.
Tagged as: media