mobu > Living on the Neener-Net > The Theory of Grooviness

The Theory of Grooviness

So I recently had the opportunity to go through a list of every #1 hit in the UK from 1952 until 2007 -- over 1100 of them.  At first I wanted to separate the good from the bad, to make a short(er) list of music I'd be interested in.  So I dutifully rated every song according to a quantitatively precise and scientifically robust system invented by... me.  Each song got a grooviness rating from 1 to 5:

But after completing this onerous task, I realized that I had an interesting data set:  over 1100 data points of grooviness versus date.  It's unclear exactly what this data set measures in aggregate, but I think it is one of the following:

With 15-30 #1 songs per year, the simplest analysis was to compute the average grooviness by year, and then graph it to look for interesting trends. 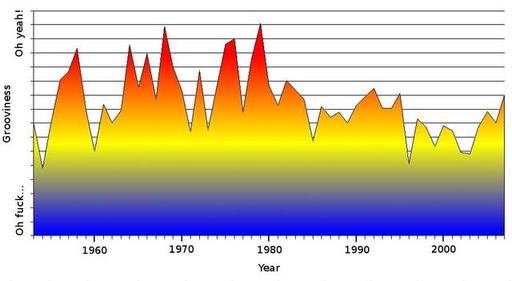 I propose the following two theorems of pop music.  Proof will follow.

Theorem 1:
Music from before you were born is dorky and lame.

Theorem 2:
After you become a productive adult, the music of "kids these days" is idiotic and lame.

If these theorems are correct, the smoothed chart of grooviness should show a distinct bell curve, peaking at some point during my youth.  Let's see what the data has to say: 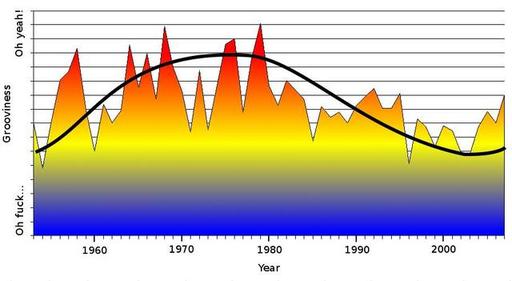 The graph speaks for itself.  I consider these two theorems proven beyond any reasonable doubt.  Surprisingly, the peak of grooviness is in 1977, a year that I would not otherwise have singled out as being particularly groovy.  I mean, seriously: Abba and Boney M at the all-time peak of grooviness?  But correlation is not causation, so perhaps Blondie and Pink Floyd had a little more to do with the late '70s being the grooviest years of all time.  By the way, I consider this to be evidence that I have kept my personal biases from influencing the data too strongly, otherwise the 1980s (my high school and university years, when I actually followed pop music) should surely have scored better.  On the other hand, perhaps the '80s really were as dumb as they now seem.

Curiously, however, the data shows that the idiocy of modern pop exceeds the dorkiness of classic pop.  This might have something to do with the fact that the grooviness of Frank Sinatra has withstood the test of time, whereas the purported grooviness of 'Nsync and Westlife have yet to be tested.

Here's another widely posited theorem that has never been quantitatively proven until now:

Theorem 3:
Music has a distinct character in each decade.  '80s music is different from '70s music, which is distinct from '60s music.  Etc.

Let's look at our chart to see if we can detect any 10-year cycles or patterns that might back up this thoerem: 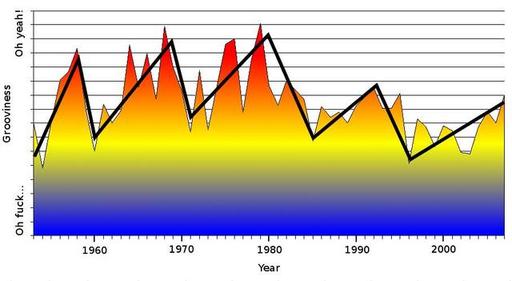 Not only does the data support the theorem, but the pattern itself is very interesting:  grooviness has a natural sawtooth pattern, peaking in the last years of each decade.  It's pretty much common knowledge that the pop-culture movements collectively known as "the Sixties" were really just the years 1967-68, with '69 being the hangover.  This data supports the idea that the same cultural effect occurs in each decade.  That's why the '50s are associated with Elvis and tailfins on cars, and why the '70s are associated with big collars and bell-bottoms.

Why is culture (as reflected in pop music) comparatively lame in the early years of each decade, and notably awesome in the last?  I hypothesize that it is a decade-level variant of the millennial effect on people's need to celebrate.  As decades come to a close, a certain desperation for change takes over the popular consciousness, allowing truly innovative works to percolate up to general popularity.  In the early years of a decade, by contrast, there is a sense that the future is here, leading to a general sense of self-satisfaction and mediocrity.  For now we will identify this phenomenon as the "Party-Like-It's-1999" Effect, or PLINE.  (You heard it here first.)  Unfortunately PLINE implies that next year is likely to suck it big.

Arguing against the PLINE hypothesis is that the absolute peaks of grooviness seem to occur in years ending in 8, not 9.  Also, the PLINE effect is weakest in 1999, the year when you would expect it to be strongest.  In fact, the chart suggests that culturally speaking, the 1990s didn't actually happen at all, and we more or less threw out the whole decade and merged it with the noughties. Perhaps genuine millennial anxiety threw us off.  After all we were already starting to get a little worked up in the 1980sâ€”the chart suggests that it took us until 1984 to completely put the 1970s behind us, and that the 80's actually peaked in 1992.

Edit: I've been thinking more about PLINE theory, and realized something significant:  the fact that grooviness peaks in years ending in 8 is actually an important feature of the data, not an unexpected weakness of the theory.  Years ending in 9 seem to be on the cusp of the futureâ€”we are almost there, so to speakâ€”so cultural mediocrity gets a head start.  If you scale up this "Party-Like-It's-1998" Effect to the century level, it suggests that the all-time peak of grooviness would be around 1980.  The charts support this analysis, with the highest peak of groove occurring in 1979.

For what it's worth, I was more than a little surprised that the 1990s were basically a no-show in grooviness.  I distinctly remember than the 1990s actually put out some damn good music, certainly better than what I was consuming during the 1980s.  But it appears that comparatively little of the damn good music made it to #1.  I think my correction to PLINE theory adequately explains this anomaly.

I see the hallmarks of a musical theory of relativity here. However, I wonder about the sawtooth effect of decade music. Why is music more satisfying in the latter part of the decade than the form? Two possibilities:

(1) The decade effect is really a new music effect, meaning that it requires 10 years for a new music form to come into its own. As the existing music paradigm matures, and musicians burn to the end of their candles (it becomes harder and harder to extend the artform), they begin to work on new paradigms, and the cycle begins again. In order for a new paradigm to take hold, the current paradigm must mature.

(2) It takes 10 years for a listener to really appreciate the new music and, in doing so, become bored with it. Hence the dramatic drop after peaking. A big musical orgasm.

Probably a combination of the two

I'm not surprised at your statement of "...the all-time peak of grooviness would be around 1980" considering your age. We all know that newly formed musical taste buds are the most sensitive and impressionable.

For example, I continue to sing all of the words to "Mirror in the bathroom" by the English Beat in times of deep brooding in the spirit of my teenage angst years. I consider this Xone of the best songs ever made while my younger (and older) friends simple look at me with a blank expression and shake their heads.