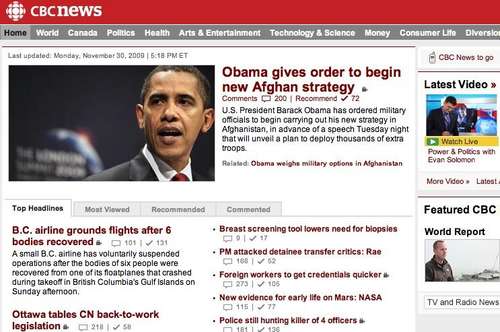 Nothing in the news.
So I'm not a huge football fan, but you don't have to be to recognize that last night's Grey Cup game had one of the most mindblowing finishes in the history of the game.  So I decide to head over to read some of the post-game analysis, and find out more about that last-second WTF penalty and what really happened.

But apparently I just dreamed the whole thing up.  It never happened.  I went to a news source that would surely have something to say about a venerable Canadian sporting tradition, the good ol' CBC.  But their front page (see below) was mysteriously mute on the subject.

Never mind, the CBC is a serious news source, right?  Obviously it's all in the sports section.  So I click through to the sports page, but mysteriously, they have nothing important to say about the Grey Cup.  The main stories are about some random regular season NHL dreck.  (See below).

Okay, well, obviously the CBC has decided that the Grey Cup is a special interest story, important only to a few oddballs out in the fringes, and has buried it all on their Football page.  So I click there.  Nothing.  (See below if you don't believe me.)

I kid you not. The lead story on the Football page of CBC news, on the day after the craziest Grey Cup in recent memory, is something to do with the NFL.

Try TSN, as CBC lost the broadcasting rights to the CFL last year