posted on Feb 22, 2009
click to zoom
Colonel Gaddafi, the world's closest living thing to a Bond villain, has an elite personal bodyguard of deadly hotties.  They follow him everywhere with their Kalashnikovs and camo gear, and reputedly have even taken bullets for him.  All while looking smoking hot.

This is undeniably awesome in a cheesy sci-fi movie sense, but the feminist world is understandably torn about whether this is a giant leap forward or backward for feminism.  That subset of feminists who thinks that comic books are a fine model for the empowerment of women in society are clearly on the side of lipstick commandos, of course.  But other than those three, the rest of them haven't decided anything, other than it seems damn weird.

Gaddafi caused a bit of a stir in the Ukraine when he showed up with his train of amazon commandos.  I'm not sure what they are talking about in this video, but it seems almost paparazzi-like in its obsession with the cuties in the background.

Clearly trading cards are coming next.
Tagged as: politics 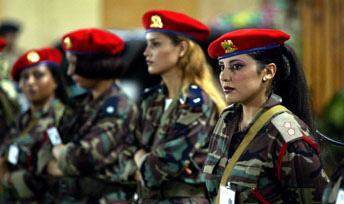