mobu > Living on the Neener-Net > Gaaaah! 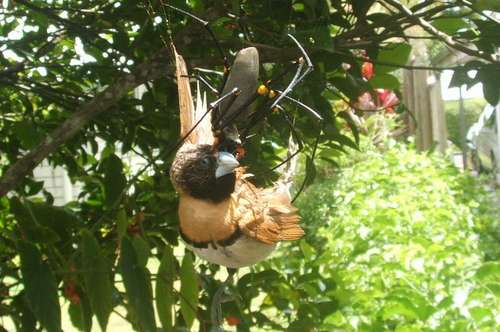 Yeaaugh!
On account of it being Halloween and all, I'm going to repost some pics kindly sent to me through my friend Rick, of the creepiest thing I've seen all year.
Apparently the spiders in Cairns, Australia, are the heebie-jeebiest creatures on the entire planet. Â Not only do they have nasty, clicky-clacky, brightly coloured exoskeletons, and disgusting, fat, grey abdomens that spin humongous webs, and huge fangs that paralyze their prey in mid-wing-beat, but they are so huge, they snatch whole birds out of the air with their webs. Â And then suck their brains out.
Gaaaaah. Â It would be one thing if they confined this monstrous behaviour to remote caves in Papua New Guinea that humans never, ever, ever went to. Â But these pics were taken in some dude's garden. Â In other words, this hideous thing could fall on your head while sipping a cool one over the barbie. Â Or it could rush out and sink its nasty fangs into your face because you accidentally walked through one of its giant webs strung between the carport and the garbage bins.
Man, if that happened to me, I'd seriously have to kill everything within a mile before my skin stopped crawling. Â If ever there was a case for nuclear weapons, this is it.
Tagged as: animals

One more thing. I just want to say that I'm not anti-spider. Although they do piss me off when then spin their webs across my garden path at face level. (Usually because I don't notice until after I walk through them.) But those spiders, annoying as they are, are also doing us all a favour and eating even more annoying flies and mosquitoes.

I have Xonly Xone favour to ask of spiderdom. If you're going to crank up the creepiness to supernatural levels, then please also crank up the bug-eating powers to similar levels. Turning your attention to vertebrates instead is NOT COOL. Today birds, tomorrow monkeys, right? And need I explain who comes after monkeys? I think not. You all know what I'm talking about.