posted on Jan 4, 2007
click to zoom
So we've been talking for years about doing some cosmic sword fighting, but we finally got out of our armchairs and made it happen.  It took five black lights, one fog machine, 50 pounds of dry ice, 140 feet of LED xmas lights, some rocking tunes, and a few cases of beer, but by the end of it, we were swashbuckling like radioactive alien lifeforms.

Sadly, the fog machines all choked and were pretty sad at cranking out fog.  The dry ice worked great for about 5 minutes, after which it just froze its water bath solid and refused to make any more fog.  The black lights were awesome, but some experimentation with tape for the blades is in order.  The tapes we used were only so-so at glowing, and when they move really fast they just disappear.  Now, that's not unlike what they do in normal fencing, so it's not a serious problem, but it would definitely be a nice enhancement to have the blades glowing like light sabers.  Perhaps genuine glow-in-the-dark tape instead of just day-glo tape would do the trick.  Clearly a prolonged and expensive research program is called for.

You can see more pics of cosmic fencers here and here. 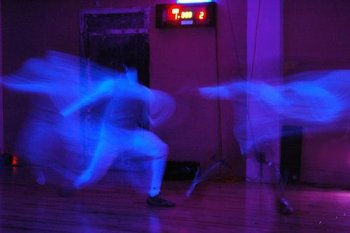